Music is second nature to The Prophet. Heâs been a driving force in the electronic music scene for 25 years. And now, the wait is over for his fans. We’d call him a hard style legend to be precise. The Prophet is one of the Dutch leading gabber and hardstyle DJs. He is also the owner of the largest hardstyle record labels, Scantraxx. We got the opportunity to interview him. Here’s what he had to say:

1. Hello. For those fans who need an introduction, please tell us about yourself.

Hello, my name is Dov J. Elkabas, better known as DJ The Prophet.

2. After a very long run in your career, you finally decide to make an album. What prompted the decision?

The moment was there to start doing it, even after all those years. It’s also like a crown on my career.

3. What is your favorite track from the album LOUDER?

Actually, I love ALL of them.. Hmmmmzzzâ¦â¦Ok, I’ll choose then, âLOUDERâ? and âHoo-eyâ? really stand out.

4. Are there any memorable incidents that occurred during the making of the album?

Uffff! Yeah, you mean like when a track is finished that you cannot open it anymore? Some memorable incidents like that?

5. How does your production methodology work? What goes on in your mind before you get to the studio?

Usually, I think about the crowd. With this album, I only thought about myself and my satisfaction.

6. So what were you into before you become ‘The Prophet’?

I always worked my ass off. I had cleaning jobs, been a postal carrier and I have worked in a 5 star hotel. Name it and I did it. 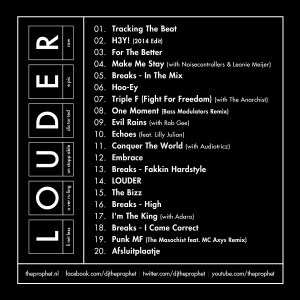 7. Which takes us further back, were you interested in music as a kid? What did you see yourself becoming?

Of course! Elvis, Kiss and Bob Marley. Music was my first love!
I had like two ambitions; being a fireman (what kid doesn’t want to become that?) and a cancer surgeon, as both of my grandparents died of cancer.

8. So, when did you decide to make a living of being a DJ?

When the 5 star hotel demanded me to have the hotel job on the number 1 spot in my life. As you can understand, I refused. I was music’s No. 1 fan.

9. In the 25+ years you have been DJing, you have witnessed many changes to the way the EDM scene functions. What according to you are the good and the bad changes?

Bad: Vinyl has gone, the crackles and noises from vinyl are the best! Good: My record boxes/cases are not so heavy anymore!

10. As a part of the âDreamteamâ? you were amongst the first acts booked by ID&T, how does it feel to still be playing for them so many years down the track?

Yeah, that feels awesome of course! It’s hard work to keep on that certain level, but h4Y! I’ll manage.

11. Having played in so many parties across multiple countries, which one stands out as your favorite?

12. And what about your productions? Which one has been your favorite so far and why?

âR3TRO!â? and âOne Moment, itâs all about emotion.

13. Do you think Hardstyle has evolved over the years? Is it centric to a certain continent or is it globally receiving due reception at major festivals and events?

It is evolving in The Netherlands yeah, and from there the virus spreads globally.

14. Being the legend of the genre, what are your predicitions for Hardstyle music over the next 5-10 years?

Hardstyle will even have more variations then before thatâs what I think.
Now we have Euphoric, Raw, Whatever. It will become harder, softer, slower, rounder, more old school minded, everybody wants a part of it now or later, believe me!

15. So, how do you kill time when you are not DJing or Producing?

I love my Sphynx cats (Naked Pussy) and Photography.

16. Do you travel a lot? Which has been your favorite getaway destination?

Yup, I do! Australia give me that special feeling.

17. Which artists in the new age do you admire and consider potential biggies that will take the industry by storm soon?

18. So where will we see you touring next?

Australia, USA, festivals all over Europe, in the Netherlands and so on.
So see you somewhere around the globe soon!