With the second edition of Ultra South Africa just one month away, the FINAL lineup that fans have been waiting for is now revealed! With the likes of Armin van Buuren, Axwell^Ingrosso, Hardwell and Martin Garrix among those already confirmed, the already stacked lineup is getting another boost with the addition of international headliners Oliver Heldens, Gorgon Cityand DVBBS—all of whom will be descending upon both Cape Town and Johannesburg for the largest electronic music festival in Africa’s history.

Very few artists have had a bigger 2014 than Oliver Heldens, who over the last 12 months announced himself to the world by creating his own ‘Future House’ genre. Fresh off the back of some of last year’s biggest anthems, including the inimitable ‘Gecko’ and much loved follow up ‘Koala’, this will likely be the first of many Ultra performances for the Dutchman following the announcement that he will also play Ultra Buneos Aires in February and Ultra Music Festival in Miami this March.

Coming off their critically acclaimed debut album release late last year, British duo Gorgon City will also be bringing their own brand of house to the continent for the very first time and are guaranteed to be a hit with the locals having racked up a number of high charting hits over the last year. Canadian brothers DVBBS, who have established themselves as one of the most exciting double acts in the scene today, round off yet another packed headline roster announcement from the Ultra Worldwide brand.

Barcelona’s esteemed Elrow club, which has become synonymous in the dance world for its seemingly never-ending parties, will be represented in full force at the event, with resident DJs Marc Maya, De La Swing and Toni Varga set to whip the locals into a tech-filled frenzy. Not to be forgotten, the famed international names will also be supported by South Africa’s biggest and best local acts such as Black Coffee, Goldfish and many more. See below for full details of all the homegrown talent on show.

With capacity for each event increasing this year due to unprecedented popular demand, over 40,000 fans are set to unite at both Ostrich Farm in Cape Town and the Nasrec Expo Grounds in Johannesburg this February, as Ultra South Africa looks to break records once again with Africa’s largest ever electronic music event.

And, with Early Bird admission selling out due unprecedented demand late last year and General Admission tickets selling faster than ever, fans still have the chance to make a late run and be a part of history. For the latest news on which other amazing acts will be setting the stages alight at Ultra South Africa, and to keep up-to-date with all other news and information, stay tuned to the official website and Ultra South Africa™ Facebook Page. 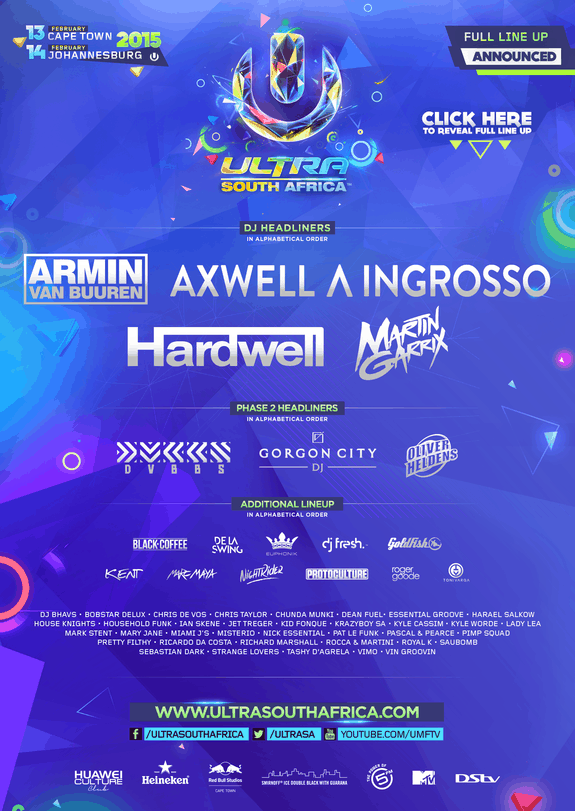 Check out the full lineup for Ultra South Africa 2015 below.