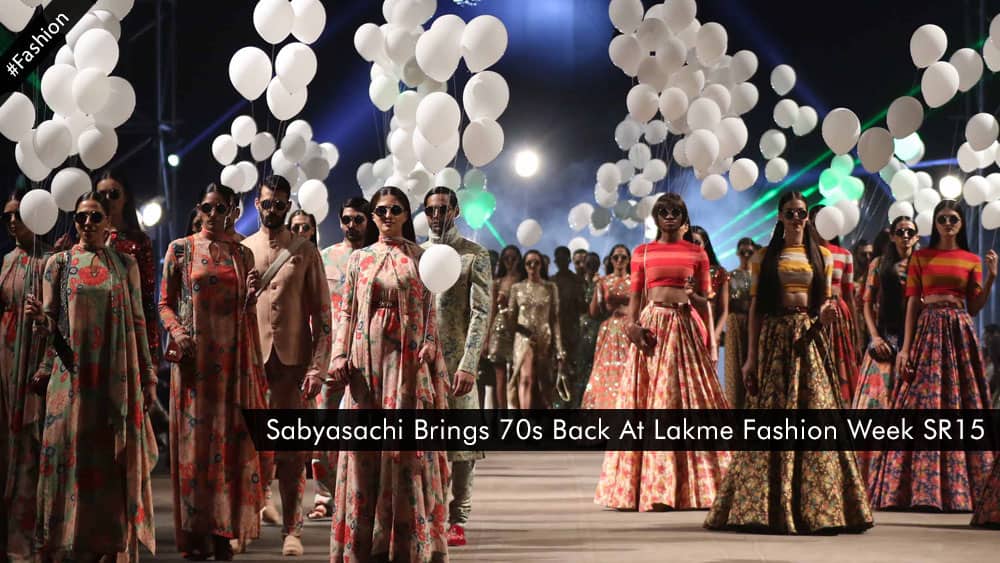 Lakme Fashion Week opened its Summer/Resort 2015 season with veteran designer Sabyasachi presenting an offsite show. Sabyasachi Mukherjee’s fabulous launch of his new Resort 2015 line “Big Love” for his label, ‘Sabyasachi by Sabyasachi’ was love at first sight for the audience as they witnessed a collection of resort wear that was mindboggling in form, colours, fabrics and textures.

Paying tribute to the 70’s decade, which Sabyasachi adores, the designer revisited the era and showcased it with his distinct signature touches and recreated the power dressing period.

Giving a new fashionable dimension to the sari, Sabyasachi brought in a romantic military flavour to the rest of the ensembles. For evening glamour, there was glitter that glistened on the catwalk.

The show opened with 70’s hit tunes, as dramatic black featured Sabyasachi’s innovation of the sari teamed with an antique gold embroidered blouse. What followed were pre-stitched draped saris, toga gowns, with shimmering hemlines, saris with net extensions and jumpsuits with sheer net capes.  Gradually moving into a colour story of brown, grey and beige, there were bell bottom jumpsuits or palazzos, long maxi shirt waister, layered capes, column dresses, boleros, gilets, a flash of red for the lining of a floor kissing cape and sari gowns that continued to mesmerise the fashion lovers.

Adding to the flavour of the collection, Sabyasachi had designed matching wedges, embroidered slip-ons, colourful moccasins, monk sandals, messenger and handbags that were in dual sling or shoulder styles to complement the garments.